Easter and the Mystery of the Missing Lord 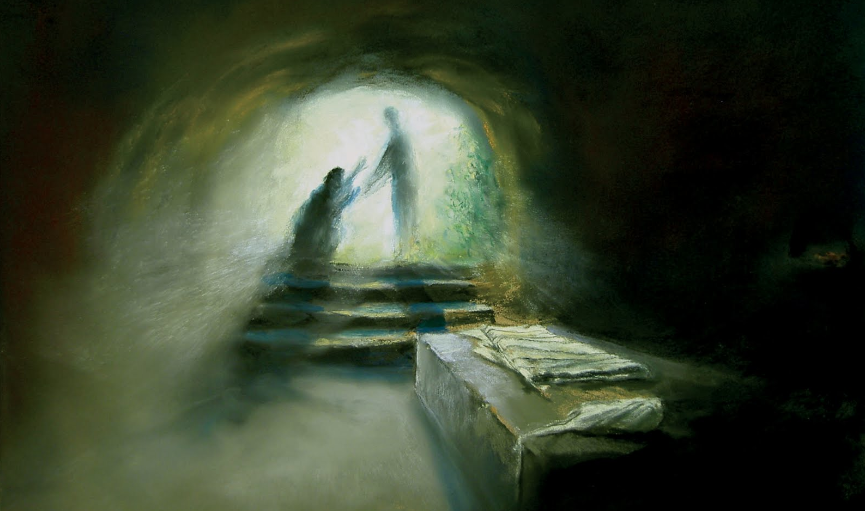 I (probably like you) love the celebration of Easter—the brightness, the triumphant music, the happy people. But the first Easter was nothing like that. The first Easter was a mystery—The Mystery of the Missing Lord. John tells us it’s so early that it’s still dark outside. Darkness and blindness in John’s Gospel always represent confusion and unbelief. That is certainly more the tone than triumph. Mary Magdalene comes to the tomb to attend to Jesus’s corpse--to make sure it decomposes with dignity--and maybe to say goodbye.

She is shocked to find the stone rolled away from the tomb. Her Lord is missing, likely taken by officials or some twisted activists so they can desecrate his body. Mary rushes and tells Peter and John, “They have taken the Lord and we don’t know where they’ve put him!” The guys run to the tomb with Mary following. Surely they’ll have some answers and ideas—they’re men, after all. But, no. They get there and examine the empty tomb, scratch their beards, and return home to hide. And they leave Mary standing there.
The sky has lightened to a soft gray-blue. Mary begins to think of her life before Jesus. She was completely possessed, immersed in a life of sin—no love, no God. And then she met Jesus and everything changed. She found God. She found love and wholeness. She found a family, and she found herself and her purpose. But now it’s all gone—he’s gone. Utterly overwhelmed, Mary weeps. She stoops down to look into the tomb. She can see two figures dressed in bright white sitting where Jesus’s body had been. They ask Mary why she’s weeping. Now for the second time, Mary shares her mysterious and tragic news, “They’ve taken my Lord and I don’t know where they’ve put his body.” Maybe these official-looking people can help.

The sky begins to lighten more as bands of deep pink and orange stretch overhead and the first couple of birds begin to sing. Out of her teary periphery, Mary sees someone. It’s the gardener—surely he knows something. (Hint: It’s really Jesus. Let’s watch what happens.) He asks why she's crying. And as a bit of a joke, he asks whom she's looking for. Now Mary doesn’t simply lament her Lord’s missing body. Instead, she actually accuses the unrecognized Jesus: “Sir, if you’ve done something with the body that was here, please have the decency to tell me where it is and I’ll attend to it.” But Jesus simply says her name—“Mary!”—and that’s when she knows. “Teacher!” she calls, now weeping tears of joy. The first rays of the sun shoot above the hilltops and illuminate the garden. The risen Lord commissions Mary Magdalene to go and tell the others that he has been raised and will be ascending to the place of authority over heaven and earth. She runs to the others and shouts the good news, “I have seen the Lord!” The Mystery of the Missing Lord is solved. And now begins The Mystery of the Risen Lord. What happens next? What do we do now that Jesus is risen? That’s another story...billions of other stories, really.

That old title, “lord,” means “someone having power, authority, or influence.” Mary Magdalene and the others are excited, not only because their friend who was dead is now alive, but because their Lord is still with them to exercise his power and authority in their lives and in the world. But for far too many of us so-called Christians, the Lord is still missing. We give very little thought (much less action) to Jesus's power and authority in our day-to-day lives, in our long-term goals, or in our worldview. He might as well still be dead. What difference does it make?

But he isn’t dead. He’s alive and he’s here now, in the power of the Holy Spirit. And he says your name, just like he said Mary’s. He wants to be your Lord, to walk with you through your struggles and dreams, and to lead you in his way of mercy, justice, peace, forgiveness, and love. He has a plan for you, and right now is only the beginning. And he has a plan for the world. Only he—the world’s true Lord—has the power to overcome our brokenness and isolation, to end terrorism and racism and slavery and crippling poverty, to bring down oppressors and lift up the oppressed.

And all of this—your wholeness and the world’s wholeness—begins only when you and I and the two billion other Christians celebrating Easter this season stand up and follow him—no matter what—in his way of mercy, justice, peace, forgiveness, and love. It begins when we can honestly say, with our words but especially with our lives, “I have seen the Lord! He’s alive! My life is his. The world is his.” Then the world will know the Lord is not missing. They’ll find him in us. They'll see him in you.