Make Someone Happy...Yeah, Good Luck With That 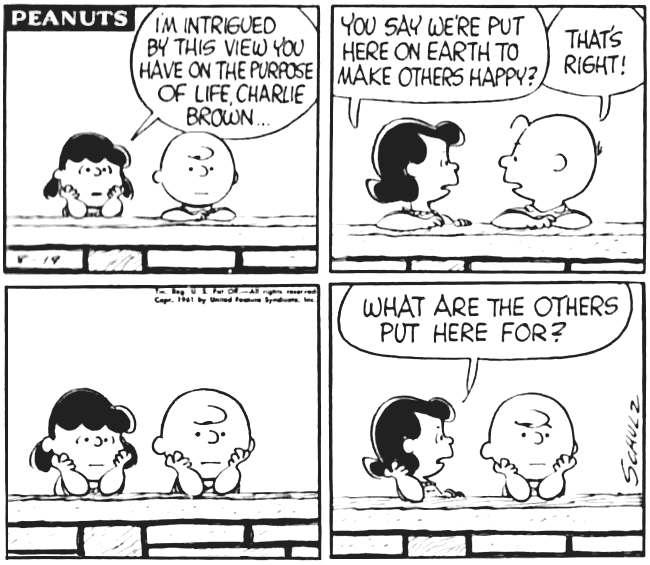 Despite Jimmy Durante’s classic words, we can’t really “make someone happy.” That’s too much pressure to put on anyone. We might do or say things that result in someone else’s passing moments of happiness, and vice versa. But for many, this is much bigger. We fall into the romantic notion that if we “make just one someone happy,” then we’ll “be happy too.” It makes for a nice song about investing ourselves in a significant other. But the reality is a trap we too easily fall into.

I can’t be responsible for the happiness of my wife or child, my neighbors or friends or coworkers, and certainly not (as a pastor) an entire congregation. Their happiness is up to them. And I mustn't depend on them for my happiness. Selfish as it seems, I need to be concerned with my own happiness and let them be concerned with theirs. The lyrics might more truly say, “Make yourself happy, and others might be happy too…maybe.” Not such a good song I guess, but more accurate.

Now this is a slippery slope. The truth is, until my happiness includes loving others redemptively, putting their good first even at my own personal cost, then much of it is a wash. Selfish happiness is no real or lasting happiness. But putting others first and making them happy are two very different propositions.

It comes down to obedience, faithfulness. If our decisions and motives and actions are held up as responsible for other people’s happiness, as is so often the case, then it’s all a fickle mess, because we are all just people subject to moods and mixed motives. And the corollary is true as well – moods and whims are also responsible for unhappiness. If others’ happiness depends on me, and mine on them, then we’re all in trouble. People are flaky.

Come to think of it, so am I. So even if I live just to make myself happy, I’m still after a wildly moving target. Happiness has to be realigned with faithfulness. We have to learn the subtle but abiding joy of living faithfully, following Jesus and participating in the life of the Triune God. Then my happiness is God’s happiness – a fixed, eternal target. This is the still center of eternal life and true happiness…and you’ll be happy too.
at April 29, 2014 No comments:

An odd thing about Jesus is that, every time he seems to be faced with temptation to give up on the Father’s plan that has him dying for the world’s sins, Jesus then overcomes the temptation with extra resolve. We’ve seen this throughout Lent. Right at the beginning of his ministry, he goes into the wilderness for the sole purpose of subjecting himself to temptation by no less than Satan himself. He comes out toughened and confirmed and ready for work.

Later, when Jesus begins to share with his disciples that he is going to have to die, Peter tempts Jesus by telling him that this isn’t the Father’s will. This really gets to Jesus, and Jesus responds by rebuking Peter (and Satan, who seems to be behind it all). Then, for good measure, Jesus says, “In fact, not only do I have to die, but anyone who wants to walk with me has to take up their cross and get in line!” Resolve!

Where will this resolve take Jesus...and us? Read the rest at SalvationLife.com... Dorothy Parker articulated the sentiment of many writers when she said, “I hate writing; I love having written.” This is probably the case for practitioners of many disciplines, loving the end result if not so much the process. The problem, however, is when that perspective keeps us from ever really beginning. This, tragically, is the case for far too many. They live with the idea of having done something, but never gain enough self-discipline, know-how, creativity, or whatever, to ever get to the finished product and, thus, fuel the next.

I think this is the case for many church leaders and Christians when it comes to making other disciples. They love the idea of Jesus’ Great Commission (Mt. 28:16-20), but lack the discipline, know-how, creativity, or whatever, to actually engage in intentional disciple-making. It’s a cliché to point to consumerism as the culprit, but it seems there is something of a consumerist current underlying this lack of perpetuating disciple-makers.

Most folks who are really hungry to learn about life as a disciple just move from study to study, program to program, even mission project to mission project—all good things—without ever getting to the “go and do likewise” phase. (By which I mean go and gather a new group of people and lead them in study and mission, but also in starting their own group, etc., etc.)

One typically unspoken aspect of this consumerism is the leaders’ desire always to have these hungry people under their leadership. If we teach them to leave our teaching and to go and lead others, will we ever get another good group of eager students or team members? We want our “favorites” there for our next study or project. Who wouldn’t!

But the other, more obvious, side is that we just leave out the instruction and facilitation for the next, crucial step—gathering and leading a new team, for the sake of releasing most of them eventually to gather and lead and release, etc.  We go from Point A (get disciples together) to Point B (teach/lead them) and then back to Point A, almost always with the same group. We never get to Point C (teach them to teach and lead) and Point D (release them to their own Point A and facilitate as needed).

Two things seem especially needful here: 1) Cultivate a culture, not just of discipleship, but of disciple-making. It could also be stated that we just need a more accurate definition of discipleship that includes perpetuation. And, 2) Instruction for Points C and D. This order is likely reversed, so that as disciples go through studies and projects and also instruction for gathering and leading others, as well as the blessing and support of their leadership, then the culture (#1) gets created.

In the end, whether someone actually likes the process of making another disciple, or they just like the end result (though there never really is an end) of having made another disciple-making disciple, they never have to settle for merely liking the idea of making disciples. Their life, their church, and their little corner of the world begins to become a library, with one living book after another that they are helping to write.