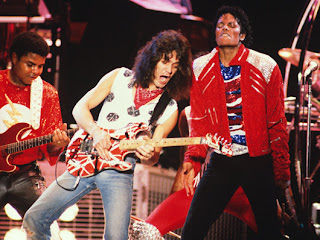 Jeff Richardson could moonwalk in his track spikes. That did it...Jeff was officially the coolest guy in Jr. High! When he wasn't beating everyone on the track, he was midfield, dancing to Thriller on somebody's boom-box. The students' interest drifted from their teammates' events and crowded around the main event: Jeff Richardson popping and breaking and doing the moonwalk in his track spikes.

Then there were the garage parties. We would get together after school on Friday and decorate someone's garage with posters and tattered old rugs and christmas lights. A garage or shed became our own little dance club, away from parents and teachers and the disconnectedness of small-town life. What was happening in a garage in Memphis, TX, population 3417, was also happening in LA or Manhattan or Paris or Berlin: people dancing to Michael Jackson.

I couldn't do the moonwalk in track spikes, but I could do it in my sock feet on my grandmother's kitchen floor...and occasionally in those garages. And I could pop. The best song was "Wanna Be Startin' Something." The beat would just get into you, the strings lulling you into a trance. And there we'd be, carried away into our own little universe. Jeff Richardson wasn't around for these dances. Even in 1983, our black friends lived literally across the tracks and we didn't see them again until school. "Mama say mama sa ma ma coo sa..."

Great post, man. Great post. I've been sitting in a house full of MJ-haters all weekend, and while I was never much of a fan, there was absolutely no doubt that he was the KING of POP. Period.

Hatin' on MJ? Come on! Sounds like they "wanna be startin' something"! That's just "bad." Tell 'em to "beat it." (Sorry.) No, I know his stuff isn't for everybody...just almost everybody!

I've been sucked into the VH-1 tribute and listening to the Greatest Hits CD you burned for us back in Van City.

David, I've been listening to that same CD--best of J5 and MJ's solo stuff. Glad you still have it...for such a time as this :^)

I agree, one day I will remember John Bon Jovi in my backseat and not the records he sold!

MJ is the king of not only pop, he's the KING OF ALL MUSIC PERIOD