The Temptation of Christ...and Us 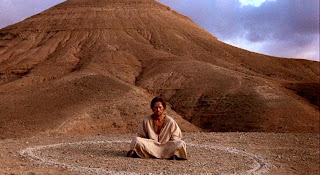 When I was about 17, the movie version of Nikos Kazantzakis’s 1951 novel The Last Temptation of Christ* came out. There were uproars and picket lines at movie theaters all over the country. Amarillo, TX was no different. Some friends and I dared to show up at the theater on opening day and, sure enough, there were the picketers—churchy people with bullhorns and signs. “That’s not Jesus up there on that screen!” they would shout. Of course not; it’s Willem Defoe. He's an ACTOR. After the rush of the shouting and controversy, we went in and saw the movie. So what was all the shouting about?


Well, as the name implies, in the movie Jesus is tempted--tempted to cash it all in and not do the whole "Messiah" thing and, instead, to settle down, get married, have children, and die a "normal" death in old age. We know "the rest of the story," that Jesus did not choose such a path. But why do we have such trouble with the idea of Jesus being tempted?

What do we think is going on when scripture says Jesus was tempted? Do we think he just strolled along in the park with temptations buzzing gently around him like a few bothersome gnats? Why wouldn’t he be tempted with marriage and sex and children and a “normal life”? And why wouldn’t he be tempted not to be the Messiah and not to die the sacrificial death on the cross? We actually know that he was.

Scripture says about Jesus, “For we do not have a high priest who is unable to sympathize with our weaknesses, but we have one who has been tempted in every way, just as we are—yet was without sin” (Heb. 4:15). Are we tempted by money, sex, power? So was Jesus. And, again, I don’t think it was just a fleeting thing. He was “tempted in every way just was we are.” What’s the point of Jesus being sinless if there was no real temptation to begin with? No, I think his temptations were at least as real—at least as tempting­—as anything we can imagine. But he did overcome, and that’s the point.

I think we have two primary reasons for being so uncomfortable with the thought of Jesus being tempted. One: we think it makes Jesus somehow "less" God. Could God really have those wicked thoughts like I do? Of course! For one thing, do we really think he doesn’t know about sin, that he’s just somebody’s little church-going grandmother with white gloves? (And watch out for those white-gloved grandmothers….) And another thing, God certainly has those thoughts when he’s also 100% human. That’s the point. He doesn’t just stand over against sin. He stands with us in the midst of sin.

The other reason we’re uncomfortable with Jesus’ temptations—and I think this is the main one—is that it let’s us off the holiness hook if Jesus wasn’t really tempted. We think, “Well, of course Jesus didn’t sin. He was God! It’s much tougher for me.” But again, it’s not Jesus’ divinity that’s really the point here. It’s Jesus’ humanity. He was tempted as a child, as a teenager, as a young career man, as a successful leader, and as what the world would consider to be a failure. And he was tempted just…like…we are. The difference is he never gave in.

We're in this 40-day wilderness called Lent, looking at our temptations and sins. But the key thing to remember is what got Jesus through. It’s the same one who led him there to begin with: the Spirit. This Spirit has just descended upon him like. Then the Spirit drives him into the wilderness to be tempted. The Spirit was with him through it all. And the exact same Spirit is with us. Jesus didn’t resist temptation because he was God (though, of course, he is). He resisted temptation because he had God’s Spirit. And so do we. This is a man who hung out at the temple even as a kid, who studied and memorized scripture, who kept his lusts in check by fasting, who got up early to pray. And so can we—church, scripture, fasting, prayer. And this is a man who resisted temptation and overcame sin. And so can we.
*{It should be noted this is not (necessarily) a recommendation of this book or movie, though both are brilliant works of their respective arts. Nevertheless, there is some really freaky-deaky stuff in there that should be approached attentively and with the genre (fiction) in mind.}
at March 11, 2009

Oh man....interesting topic bro. Could Jesus have sinned? What does it mean that Jesus was tempted? All sorts of very deep and terrifying questions errupt in my head as I read what you wrote.
Considering that Jesus was 100% man (and 100% God), I can only arrive at no answer to the first question (could Jesus have sinned) since it philosphically becomes a nonsensical question. But the other question, and many more like it, leaves me perplexed and doubting my conclusion on the first question.
I mean, why would God go through the trouble of telling us that Jesus was tempted? There was no distinction between his temptation and ours, in and of itself. That seems so crazy to me. But in the end, I have to admit that it makes me feel so vindicated. It means that my tempation is not a sin. Just because I see a beautful woman and think that she is beautiful and feel tempted to ....well...you get the point....that does not mean that I sinned, just because the temptation may be there. It is what is happening in my heart, I suppose. Which is rather freeing! Because so many times I let the tempation itself make me feel so guilty. I guess it is the pharasie (sp?) in me that does that.....ok.....rambling.....must stop....before.....rambling....takes....over....my soul....straying...off....topic....ahhhhhh

Good thoughts Paul. It can be a slippery slope because, as Jesus tells us, we have to keep those thoughts and our hearts in check because that's where sin starts. That said, we are too often tempted (if you will) to call temptation "sin," and we end up feeling guilty just for being tempted. Instead, I think we do better to follow Jesus' example of discipline and faithfulness in order to resist. Good rambling!

I was with Robert when we crossed the Amarillo picket lines. I don't know if you remember, Robert, but we had some fellow CHS classmates in that line. Good times, good times.

I remember it well, and could name names (though I won't...for now!) We've crossed many (literal and figurative) picket lines together, my brother. When I told this story in the "temptation" sermon recently, I named you specifically and talked about how you got all up in the grill of the chief bullhorn guy. I believe you ended with a hearty "Thank You!" and did an about-face and we marched into the theater. It could've only been sweeter if you'd said, "I'm not locked in here with you...you're all locked in here with me!"

I can't remember my login but I believe that temptation is all about growth. We will no doubt be tempted till the day we die. We may not see progress in our ability to fight temptation, but if we survive it and have faith in God, we still grow stronger. We become experienced and more knowledgable. Temptation is just like reading a book. Read it carefully to fully understand it.

Diana Garcia writes...
I completely agree with Judd here. The spiritual journey is a personal one, not one that can be dictated by doctrine or dogma (i.e. what is external to us). Blind/rote adherence to external social/religious dictates does not equal personal growth or ‘deliverance’.
We have to look inside, recognize and admit to our own conscious *and* unconscious capacity for both good and evil (the German term Auseinandersetzung comes to mind) and be willing to grow from personal experience. Jung wrote volumes about it!

My view on temptation has changed dramatically over the years. I think that our mandate is to do good for other people--to show love and compassion and make a difference. I think temptation exists in those things that take us away from that--the pursuit of more and more whatever. The temptation to live our lives at the expense/detriment of others. The temptation to turn our backs on those in need, whatever we turn to--religion, money, sex. Temptation is not, to me, someone's definition (doctrine/dogma) of right and wrong, good or bad, sin or not, but rather, choosing to live your life with disregard for the lives and cares of others.

Judd--I would hope we might see progress in our ability to fight temptation, in the sense of our weakness in the face of temptation. However, the "amount" of temptation may not change or may even increase. So I agree whole-heartedly that we must "read it carefully to fully understand it" and, I would add, overcome it.

Diana--I agree with your every point. The spiritual journey is personal, and blind/rote adherence to said dictates does not equal growth or deliverance. I do, however, believe that carefully considered, measured, and passionate adherence to some doctrines can aid in(not "equal") personal growth and deliverance. That is to say, I agree that we must grow from personal experiences, and I also believe we can grow from the collective and individual personal experiences of others throughout history and around the world. This is another subject about which Jung had much to say.

Tom--I think you're dead on, buddy. My dad likes to say evil is "live" backwards--literally and figuratively. When we live in the opposite manner from what our Creator and Lover God intends, that is evil. This is simplistic and incomplete, but a helpful starting point. I think what you say here is very important. Selfishness, destruction, idolatry as opposed to sacrificial love, creativity and beauty, faithfulness and humility...are really getting at the heart of Jesus' summation of things: To love God completely and others as self sums up the Law and the Prophets. And these are things against which we are so often tempted.

You guys are awesome! More?