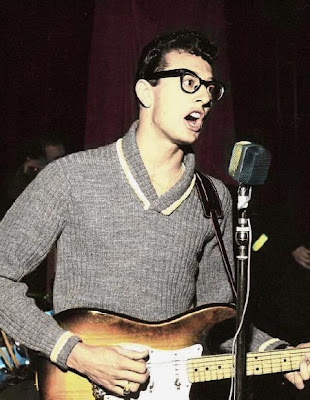 50 years ago today, the true King of Rock n' Roll died when Buddy Holly (et al) was lost in the snow and wind of a fallen midnight plane flight. There's Elvis, Chuck Berry, Little Richard, Bill Haley, Eddie Cochran, Jerry Lee Lewis and the list of rock pioneers and champions could go on. But Lubbock, TX's Buddy Holly, from his use of the Fender Stratocaster as his primary instrument to his use of the celesta, from his employment of multi-tracking technology to his signature glasses, Buddy Holly was a true original.

Elvis sounded black, but Buddy actually won over the crowd at the Apollo Theater. Lennon and McCartney were honored to meet "the King," but they named their band "The Beatles" in part to honor Buddy's band The Crickets. Bob Dylan spoke reverently of seeing Buddy at a gig just a few days before the crash, of the mystical moment that they actually made eye contact. The stories of influence and respect go on and on, but in the end it's the music.

Watch this 1958 performance and notice how much Buddy does NOT fit in with the stiff white people around him. Feels like he's about to jump out of his tuxedo. Now THAT'S rock n' roll. Just listen to the alienation and longing of "Peggy Sue" and "Maybe Baby," the elation and joy of "That'll Be the Day" and "Oh Boy," and the flat-out rocking of "Rave On" and the Bo Diddley hambone of "Not Fade Away." Treat yourself to some Buddy Holly on this 50th anniversary of "the day the music died." He deserves it...and it's good for your soul! Rave On!!
at February 03, 2009

Many thanks for the article - a good, concise, interesting intro and commentary on Buddy Holly. I'd like to get to know his music better and you've just provided a good starting-point !

Here is a news item about the real-life Peggy Sue from BBC News today in the UK:
http://news.bbc.co.uk/1/hi/magazine/7861891.stm

Very cool! Thanks for reading and thanks for the BBC article, Kenneth. Hope you'll get hold of some of Buddy's music and enjoy.