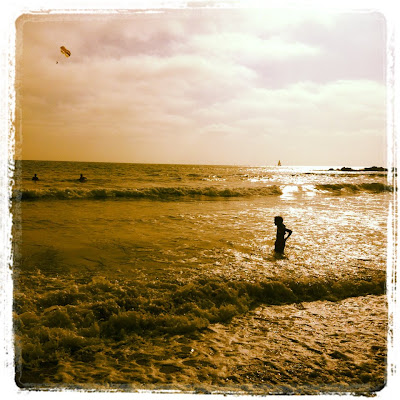 My years serving among the church have changed my youthful belief that if we just get out and end poverty and hunger and disease and war, then the world will become God’s kingdom. And I left behind the youthful period of navel-gazing, believing that the goal of all things is to flee earthly troubles by getting in touch with some spirit world. And I also left behind—though the temptation always lurks for pastors—the goal of simply getting warm bodies seated comfortably in pews and building a strong church-organization. I left all this behind for the power to become a child of God.

Perhaps the most magnificent promise in human history is that those who welcome Christ are given the power to become children of God, new creations born of God’s will and God’s power. This becoming, the work of God’s grace alone, is nonetheless a cyclical process--starting within, moving out, and flowing back.

Jesus described it as being part of the flow of real life, that those who thirst for something more, for something real, should come to him and drink. Then they would be filled with streams of living water--that is to say, filled with real life. The thirsty come to Jesus, the Source, they are filled and poured out to others who are thirsty, they lead the others to the Source, from whom they are filled in order to be poured out, and the cycle continues every moment of every day until “the earth is filled with the knowledge of the Lord as the waters cover the sea” (Is. 11:9).

I realized I had to raise my
daughter as a sister in Christ.

What does this look like? I’ll tell you what it doesn’t look like: headlines. I remember sitting at the dinner table with my wife and our then 6-month-old daughter, reflecting on the evening news—war, corruption, starvation, scandal, greed, blah blah blah. I was sickened in my depths at the thought of my child growing up amidst such horror. And I was just as sickened wondering what her generation might do with such a majestic mess.

“She’s so innocent,” I thought. “Where is the change? Where are the heroes? Who’s going to fix everything?” But I couldn’t get away from the fact that I must do more than just change the community or change the government or change the world. I have to start changing myself—“be the change you want to see in the world” and all that. And we are key parts of each other's world.

Then I realized I couldn’t just raise my daughter as a good human being. I had to raise her as a sister in Christ with the power to become a child of God—a human becoming. She and I share a journey, a journey away from death and toward life. We are on the journey with hundreds of millions, each with the power to become a child of God. And the whole earth trembles as it waits on our becoming. For the creation waits in eager expectation for the children of God to be revealed (Romans 8:19). How long must it wait? How long... I'm growing frustrated with a new trend: stoplight texting. Many of us have done it (guilty!). We pat ourselves on the back that at least we're not texting while driving. But if you've been behind someone who doesn't notice that the light has changed, and they sit there texting or reading email or whatever as cars in the other lane are streaming by, you know the frustration.

Maybe even more than the traffic trouble, it's the spiritual statement stoplight texting is making. It points to the unwillingness just to be in the moment. "Oh, I have a few seconds...I'd better busy myself." It carries over to the dinner table, the concert hall and movie theater, and any number of day-to-day activities. But it's the stoplight sessions that seem most telling because the time-frame is so short and unpredictable...and there are all those other cars with which we are interacting.

It's important to be
and to be aware of our being.

Maybe you don’t want any of this. Maybe you’re content with living in your phone and being anywhere but here. And maybe doing one-tenth each of ten things at once is better than the wholeness of singularity. That’s fine. Just stay out of my lane.

Jesus Christ is the true physical embodiment of divine rebellion. Look at him trampling waves underfoot, marching across the watery chaos as if on dry ground. Watch him heal diseases and raise the dead as if even the laws of life and death have no bearing on him. See him turn bland water into fine wine and miraculously multiply bread and fish to feed the masses, throwing new light on disciplines as disparate as chemistry and supply-and-demand. And at every turn, hear him confound and rebuke the would-be authorities that gnash their teeth to put God in his place.

In Jesus we see God flouting or perfecting the laws of nature, of physics, of government and economics, of social sciences and justice and power, and even the religious laws his own people would claim were handed down by God himself. What he is really doing is ushering in a new kingdom with its own law of love, exposing the ineptitude of our attempts and the bankruptcy of our posturing.

It all culminates in perhaps his greatest act of rebellion: the cross. We typically focus, and rightly so, on the cross as Jesus’ ultimate act of obedience toward the Father. But in the face of the world’s system of power and twisted misunderstandings about empire and immortality, the cross is the ultimate act of rebellion. It’s all the story of God taking his place as King: a crucifixion for his coronation; thorn branches for his crown; nails for his scepter and footstool; and a cross for his throne, upon which he hung to survey his cursing, cowering subjects.

God grabbed the chaos of human sin and the death of all creation,
took it in his bloody hands, and fashioned redemption.

He was brutally and publicly shamed, a first-century lynching to show passersby that this naked, bloody mess is what happens when you rebel against the world’s authorities. No one would look upon this chaotic scene and see the greatest triumph in the history of the world…no one except God. For in that rebellious act God grabbed the chaos of human sin and the death of all creation, took it in his bloody hands, and fashioned redemption. Using death to kill death, he rebelled against the grave and rose to inaugurate the new creation. You think God isn’t rebellious? That’s rebellion.

We’ll do our best to understand it, to give it doctrinal labels and argue about who has it all figured out. But we’ll never have a clue. It’s time to fall into that rebellion and let it knock us around. We mustn’t wear a T-shirt and call it rebellion or, worse, turn our sanctuaries into high-tech lemonade stands and pander for customers.

Jesus said anyone who wants to follow him must deny themselves and take up their cross. So let’s shed the sequined jumpsuits, destroy our idols (American and otherwise), free our minds from the cults of personality, get in the faces of our lawmakers instead of at their other end, take up our crosses and follow Jesus. Follow him all the way—to scorn, to shame, to death, and on through to the life that really is life.

We’ll take all the sin and fear and power-hunger and world-conformity and me, me, me! and all the chaos we’re drowning in and let it all die. We’ll rebel against the American dream and what Washington and Hollywood and Madison Ave tell us our lives should be. And we’ll set out for that undiscovered country whose music already beckons and whose King is the Rock God.