Falling in Love With the Church

My calling to pastoral ministry was a little odd. Other pastors talked about growing up in church, about how much it meant to them. They spoke about little old ladies pinching their cheeks and telling them they will make a fine pastor some day, and about youth pastors and older pastors giving them leadership roles and letting them "try on" pastoring for size. There seemed to be a rather clearly-marked path that led right through college to seminary and into the pulpit.


Not me. True, I was a child in church. I have memories of Pastor Ken Metzger yelling passionate sermons (and even scaring me a little), of Pastor Buff Hearn playing his guitar in church (can you really do that?!), of my mom playing the organ, of going to Sunday school and Vacation Bible School. And of course, my chubby cheeks were sufficiently pinched. I was a well-behaved church kid. But I didn't stay very active in church. And I was certainly never going to become a pastor.


Needless to say, things changed. There were a number of steps along that road that eventually did lead on to seminary and into the pulpit. Those seasons can be celebrated (and cursed) in other posts. But there was one main thing that opened my eyes and heart to pastoring: I fell in love with the church.


It wasn't just memories of bazaars and revivals and Christmas Eve candlelight services; of my grandfather being the first to arrive at church on Sunday to make the coffee and my grandmother leading Bible studies for the ladies circles. It was those things. But more than that, it was freaky mind-blowing stuff like this:


"I ask the God of our Master, Jesus Christ, the God of glory, to make you intelligent and discerning in knowing him personally, your eyes focused and clear, so that you can see exactly what it is he is calling you to do, grasp the immensity of this glorious way of life he has for his followers, oh, the utter extravagance of his work in us who trust him--endless energy, boundless strength!


"All this energy issues from Christ: God raised him from death and set him on a throne in deep heaven, in charge of running the universe, everything from galaxies to governments, no name and no power exempt from his rule. And not just for the time being, but forever. He is in charge of it all, has the final word on everything. At the center of all this, Christ rules the church. The church, you see, is not peripheral to the world; the world is peripheral to the church. The church is Christ's body, in which he speaks and acts, by which he fills everything with his presence." (Ephesians 1:17-23, The Message)


Not a bad way to spend a life. Of course one needn't be a pastor to be part of this. (Indeed, that might be a last resort for many of us.) No, it is the people: organ-playing moms and coffee-making grandfathers, guitar-playing pastors and cheek-pinching old ladies, young and old women and men with light or dark skin in cathedrals or huts playing organs or djembes, thousands in an arena or a dozen in a living room--all knit together...forever...joined to God at the center of eternity. Even me. Even you.
at May 26, 2011 No comments:

Murder, war, economic collapse, ecological turmoil...this is all in today's paper. Not an assessment of this year's, this month's, or even this week's news. Just today.
"Jesus is coming at 6 p.m. to take all the good people away from the bad people" and "Does hell really exist and, if so, who goes there?" That's what our culture thinks the church is about. In each of the above headlines, there are disciples of Jesus Christ working for peace, justice, reconciliation and healing.
But somehow we've allowed ourselves to get so caught up in conversations about hell and the rapture that we appear to be so heavenly (or hellishly) minded that we're no earthly good. This is NOT the case, but anyone on the street would be hard-pressed to come up with the name of a Christian working to end the modern slave trade or bringing potable water to a village, as opposed to, say, naming false prophets who put up irrelevant billboards.
Hell and the Rapture are not unimportant. Ask an addict or an AIDS orphan or those living in war-zones if they believe in hell. Ask a homeless family or a 13-year-old sex-slave or just any lonely, lost, marginalized, tormented soul if they're ready for Jesus to come back. It's not the subject...it's the framing.
Hell and the Rapture are not some trivial sci-fi fantasies that we speculate about over gourmet coffee. Hell is the life of death, the path away from the God who is Love toward destruction and loss. And hell is reflected in those headlines. The Rapture is the return of Christ--not to flee the earth that so desperately needs him, but to set right all that is so wrong and to bring his kingdom in all its fullness. The need for Christ's presence is also reflected in those headlines.
But in the meantime, the church must take her PR in hand. And this, not by more billboards and superficial marketing, but by framing the conversation around the true life of the church. Indeed, it is the very presence of Christ through the Spirit-filled life of his church that should be front and center in our conversation. There doesn't have to be speculation: the Son of God is here...really! The gospel cannot continue to be commandeered by attention mongers and false prophets. There are too many true Christians in the world doing the true work of Christ.
If it bleeds, it leads...I know. It's likely we'll never hear much about the real kingdom-building that humble Christians are doing every day. The media eats up sensationalism. But does the church have to feed the monster? It'll keep coming back around. There will be more scandalous tripe--a "lost" gospel or a Catholic conspiracy or a grilled Cheesus or Satan at a Starbucks. We already have the Rapture re-predicted for Autumn--I'm sad there won't be a World Series but at least we won't have to rake those leaves!
I urge all apprentices of Jesus to keep modeling the life of the Master. And when the opportunity arises--with and without words--turn sensationalized conversations toward this truth: God is Love. And may the headlines read: God's Kingdom Coming On Earth...Now!
at May 24, 2011 No comments: 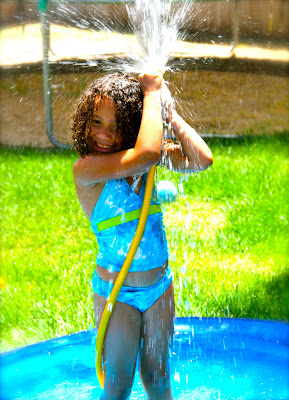 My 5-year-old daughter dives headlong into her pool. It's nothing fancy--just a good-sized inflatable pool with an inflatable slide. You plug the hose into the slide so water arcs onto it, making it slick like a slip-n-slide. It's a nice inflatable pool, but far from an in-the-ground pool pool. But to her, it's a slice of paradise.
She stands there, having unhooked the hose, and lets the water shoot overhead and splash down on her. She laughs uncontrollably. The sun glistens through the water, turning it into diamonds showering upon this little princess--cheap water-diamonds from a yellow hose and a backyard spigot. She doesn't know it's not a pool pool or that they are cheap water-diamonds. She only knows that all of time is present in this moment, a moment she will live in until her parents make her come inside. This is joy.
We need this joy. Somewhere between trying to be cool and trying to be responsible we stopped showering in water-diamonds. What we had wasn't enough. Who we were wasn't enough. Where we were heading wasn't clear and, so, became our obsession. How crazy is that? We became obsessed with the non-existent--things we didn't have, identities not our own, a future that was only a dream or a nightmare--and we called that "growing up."
We do better to "become like a little child." All of space and time are present in this little inflatable pool and yellow hose. There is sunshine and there are people I love. There is laughter and a shower of water-diamonds. There is joy...and I can dive headlong into it.
at May 19, 2011 1 comment: